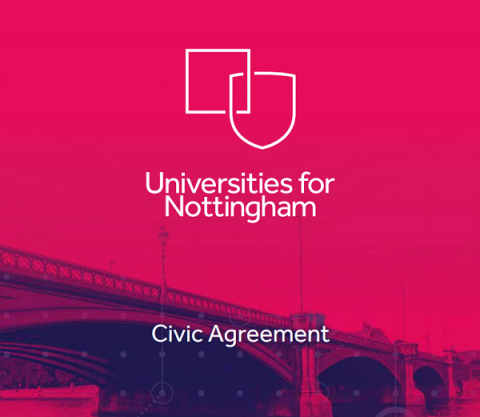 By signing a new civic agreement, Nottingham's universities have pledged to work with city partners to improve the lives of local people across the city and county.

The Universities for Nottingham Civic Agreement has been developed in response to the COVID-19 pandemic and is a first of its kind in the country!

It has been signed by both the University of Nottingham and Nottingham Trent University's vice-chancellors and the leaders of six other major organisations in the city and county, including both local authorities and NHS organisations. It contains a programme of fourteen priority initiatives that will begin in 2020-21 and will be delivered by the universities and other signatories to help drive economic revival, support communities and protect jobs.

The development of a civic agreement was one of the recommendations of the national UPP Foundation Civic University Commission and Nottingham's universities are the first of nearly 60 universities across the UK who have, thus far, committed to publishing one.

Overall, the agreement is the result of over 400 hours of conversation between over 150 local partners and colleagues that have taken place over the last 18 months and sets out a plan of collective action, covering five themes; Economic Prosperity, Educational Opportunity, Environmental Sustainability, Health and Wellbeing and Unlocking the Universities.

Councillor David Mellen, Leader of Nottingham City Council, said “This civic agreement recognises that the two universities play a valuable role in our city life, culturally, economically and socially. Students from across the country come to Nottingham and add to our vibrant and diverse communities, many of whom stay here and then contribute further to the city. The Universities for Nottingham initiative recognises the challenges we face in the city and that by coming together with the city council and other partners, we can all work together to improve the sustainability, health and economy of the city. I welcome this contribution to the city and look forward to making real strides for Nottingham people together.”

If you would like to find out more about the civic agreement, read this press release from the University of Nottingham.

You can view the Universities for Nottingham Civic Agreement (pdf) in full here.

You can also view the Consultation Synthesis here which sets out in greater detail the evidence-base and conversations that have helped shape the civic agreement so far.