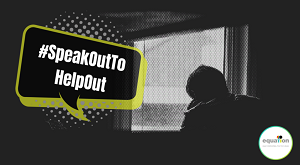 Equation’s Domestic Abuse Service for Men, which serves Nottingham City and County, launched the campaign after noticing that many of their referrals were coming through from incidents being reported to the police, with few male survivors referring themselves prior to police involvement or intervention from health services.

According to Equation, it's estimated that around 6,000 men in Nottinghamshire will experience domestic abuse each year, so it’s clear that supporting them to speak out to their friends and local support services is vital.

The online campaign encourages men to take to social media to highlight the issue of speaking out, and in doing so, create safe spaces in their own networks and unpick widespread attitudes towards men such as 'real men don’t talk about that stuff' and 'you’ve just got to man up.'

On their website, Equation states, "from speaking to men that we've supported, we've learned that many of them have faced barriers to accessing support or ending their abuse. Some of the examples they have given include not knowing support was available, feelings of guilt, fear, shame or not being believed, thinking the abuse is part of what is considered normal in a relationship, hoping that things will get better and worrying about losing access to their children.

"Many of the barriers these male survivors have spoken about are rooted in societal attitudes of gender equality, toxic masculinity, stigma and shame of speaking out. We hope that through this campaign, men in Nottinghamshire will feel confident taking to social media to raise awareness by sharing social content which states that they believe it is ok to talk, that they will listen without judgment, that speaking out about abuse, mental health or any other concerns doesn't make a man any less of man."