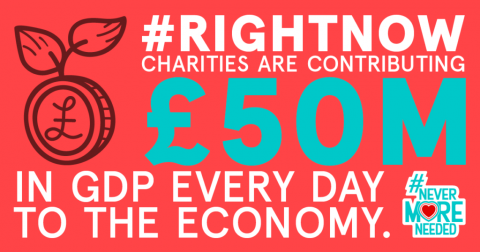 Last week saw the launch of the national #RightNow campaign - part of the #NeverMoreNeeded movement.

Using the hashtag #RightNow, charities took to social media on Wednesday (17 February) to send a public message to the government that the Voluntary, Community and Social Enterprise (VCSE) sector urgently needs an Emergency Support Fund, so it can continue to provide vital support to communities during the pandemic.

If you'd like to take part in the campaign, you can add your name to an open letter to the Prime Minister here. NCVS has joined over 900 organisations in adding our name to the letter so far.

The campaign was dealt a blow yesterday (23 February), when it was reported that Baroness Barran, Minister for Civil Society, had said that the government has no plans for a second dedicated emergency coronavirus funding package for charities. However, we are remaining positive and would encourage you to show your support for this campaign and share it with your networks, so that we can keep putting pressure on the government to think again and make the charity sector's voice heard.

You can get involved with the campaign on social media by downloading the campaign graphics and sharing a post that highlights what you, or the charities you support, are doing right now to help communities and make a positive difference. If you're posting on Twitter, please tag NAVCA in your post, so they can give you a retweet.

The campaign will run until the release of the government's Budget 2021 on Wednesday 3 March (2021).